Fields of bright orange poppies, blue skies,
and spectacular mountain-top views…
The most glorious vision of Spring in the Bay Area!

Does it seem as though Southern California gets all the glory for Superbloom flower fields? They have multiple unbelievably stunning Spring wildflower fields that are so popular that they draw people from all over the state to admire them. I mean, who can resist these gorgeous fields of bright orange California poppies? In fact, I was one of those people who drove hundreds of miles from the Bay Area to the Antelope Valley to see this phenomenon for myself during the Superbloom of 2017, and it was indeed spectacularly breathtaking!

But does the Bay Area have similar fields of Spring wildflower glory? Do I have to drive hundreds of miles to see poppy fields again? I was determined to find some wildflower fields closer to home, and I ended up finding gold at Mt Diablo State Park! The best part for me is that it’s less than 15 minutes from my home. If only I had known about this sooner!

March 21, 2021 Field Report: the poppies have arrived for the season! We spotted many areas along North Gate Road with small to medium fields of bright and vibrant poppies!

Disclosure: Some of the links in this post are affiliate links. Thank you for your support, I hope you have a wonderful day! 💛

What I found at Mt Diablo State Park was nothing short of spectacular! Not only were there multiple areas covered with bright orange poppies, but many other types of wildflowers throughout the park as well. All from the highest mountain in the area with sweeping views of the Bay Area below. Even better, they are accessible to visitors who are short on time since many of these wildflower fields, including those pictured in this post, are right next to the main road!

When to See Spring Wildflowers at Mt Diablo State Park

Unlike some Superbloom flower fields (such as this one at the Carrizo Plain that we visited a couple years ago), poppies and many other Spring wildflowers bloom at Mt Diablo State Park every year! According to the local tourism agency Visit TriValley, Mt Diablo State Park is home to “endless fields of California Poppies, Daffodils, Dove Lupine, and dozens of other varieties of wildflowers” even on years when there isn’t a Superbloom. Depending on the timing and amount of rainfall during the winter, poppies and other wildflowers typically show up at the park between March and May.

This past March and April, we visited the park several times to watch for these poppies and were finally rewarded in mid-April with amazing fields full of cheerful orange California poppies (which are now my favorite flowers by the way, aside from my garden roses of course)! The fields of orange flowers and the stunning mountain-top views make for a most beautiful combination! These flowers lasted for several weeks and we were able to go there several times to enjoy them since the park is so close by.

Of course, we brought our beloved Nikon D750 (new model D780 here) full-frame camera with us to capture these pictures!

We were also lucky that it was not that crowded when we went, but it was definitely more crowded on the weekend vs a weekday. Only a few other cars joined us there when we visited during the weekday.

Where to See the Wildflowers in the Park

Poppy fields and other wildflowers have been reported throughout the park, including along North Gate Road, the area around the Summit Visitor Center, Rock City, the road past the South Gate Entrance, and the Mitchell Canyon – Eagle Loop.

All of the pictures on this post were taken along North Gate Road leading to the Summit Visitor Center, entering from the North Gate Entrance. Within 5 minutes past the entrance, we started to see hillsides dotted with bright orange poppies, with many more within 15-20 minutes past the entrance. It was so tempting to stop every time we saw poppies! The best spots have both poppy fields and panoramic views. Please note – it does tend to get windy up there even on sunny days, so hang on to your hat! Otherwise you may end up chasing after it like I did!

If you want to continue exploring the area, the entire drive from the North Gate Entrance to the Summit Visitor’s Center takes approximately 40 minutes (without stops), and much of the road is very twisty and curvy. As I mention in my Big Sur post, if you’re prone to car/motion sickness as I am, I recommend getting a good night’s sleep, having a good breakfast, and avoid looking at the phone if you’re a passenger. I also use a motion sickness wrist band, which helps me a lot.

For more information on wildflowers at Mt Diablo State Park, including a “What’s Blooming Now” report, head over to the Mt Diablo Interpretive Society’s website.

By the way, if you love flowers as much as I do, you might be interested in my post on the Most Beautiful Flower Books (it’s one of my most popular posts!). I also design flower-themed notebooks and journals you might like! Here’s an example on Amazon.

Mt Diablo State Park is a huge park in the San Francisco East Bay. Huge as in over 20,000 acres! It has spectacular panoramic views of the Bay Area at the Summit Visitor’s Center and also from the road up to the summit. On a clear day, visitors can see for hundreds of miles from the peak of Mount Diablo.

The park is located in Walnut Creek, about 28 miles east of San Francisco. It’s a 40-minute drive from San Francisco to the North Gate Entrance of the park without traffic. Please check the park website for current status before going.

For 2021, the vehicle entrance fee is $10.00 for the North Gate Road Entrance, or free if you have the California State Parks annual pass.

Mount Diablo has a fascinating history as a sacred place for Native Californians. It was historically home to many tribes and was recognized as the birthplace of the world (!). It’s believed that most of those who lived in the area a couple of centuries ago made a trip here as a pilgrimage at some point in life. Learning this history of the mountains makes this place feel even more special to me!

Learn more about the park from the State Parks website and from Wikipedia.

If you’re looking for more California Spring travel ideas, check out my posts on the Most Beautiful Spots in Big Sur, the Purple Ice Plants of the Monterey Peninsula, the spectacular Flower Fields of Carlsbad Ranch, the Poppy Fields of Mt Diablo State Park, and the beautiful Spring Peach Blossoms in the East Bay!

All of my California travel posts are here!

If you love nature, wildflowers and exploring as much as I do, then I think you’ll love these books from Amazon too!

In addition to this blog, I also design flower-themed journals + notebooks, available now on Amazon! More info on my Fleurette Press website! 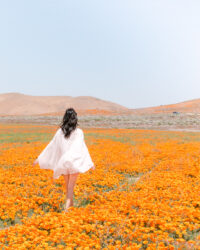 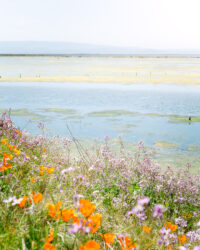 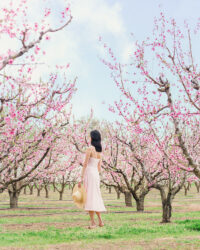