Superbloom at the Carrizo Plain

The Carrizo Plain was the first stop of our California Superbloom roadtrip, which included a trip to see glorious poppy fields also. After seeing pictures of fields and mountains covered with wildflowers at the Carrizo Plain National Monument in Southern California, we knew that we had to make a stop on our way even though the area is quite remote. Although it was near the end of the season in April, it did not disappoint, as we were treated to stunning views of vast fields and mountain-sides covered with wildflowers.

The yellow and bright orange colors contrasted vividly with the deep blue waters of Soda Lake, while white and purple wildflower patches peeked through along our walks and hike. There is nothing more beautiful than nature’s glorious palette!

What is a Superbloom?

According to Wikipedia, “A superbloom is a rare desert botanical phenomenon in which an unusually high proportion of wildflowers whose seeds have lain dormant in desert soil germinate and blossom at roughly the same time. The phenomenon is associated with an unusually wet rainy season.”

A Superbloom of Spring wildflowers in California happens rarely, only after a particularly wet winter, and usually in the desert areas near San Diego and Walker Canyon / Lake Elsinore. This year, however, the Superbloom spread north, to the remote Carrizo Plain, and to the Antelope Valley California Poppy Reserve and surrounding areas. These areas were literally covered with bright orange, yellow, white and purple wildflowers as in a flower-covered world!

Where is the Carrizo Plain Monument?

The Carrizo Plain National Monument is located about 170 miles northwest of Los Angeles between San Luis Obispo and Bakersfield. It’s a vast and remote area that came alive with wildflowers this year due to the unusually wet winter after a long drought.

As we drove south on US-101, we turned onto CA-58, then took the Soda Lake Rd exit. It took us about 4.5 hrs to drive there from the San Francisco Bay Area.

These photos were captured from several different locations: in fields just outside the national monument along 7 Mile Road, at the Soda Lake overlook inside the monument, and from along a path up one of the mountain ranges. As we approached the Soda Lake overlook from Soda Lake Road, we began to see fields of wildflowers near the intersection with 7 Mile Rd. We got out and spent almost an hour taking pictures from that area! (we walked and drove east along 7 Mile Rd.)

After we visited the stunning Soda Lake overlook, we decided to head up one of the trails off of 7 Mile Rd for a closer-up view of the yellow hillside wildflowers and were able to catch a beautiful sunset on the way down.

We are so happy to have witnessed this rare Superbloom in California! I hope you enjoy these pictures! For more pictures of the wildflowers at the national monument, see the Bureau of Land Management’s Flickr’s album.

I love the art of photography and I love being able to capture the beauty from my travels both near and far. Here’s a quick list of the equipment that we used for this photo shoot:

Nikon D750 – a fantastic full-frame camera and one of the most economical ones on the market today.

Nikon 50 mm f/1.4G Lens – my go-to lens for portraits and for general photography.

I edit all my photos with Adobe Lightroom. Read more about my photography equipment here.

If you found this article helpful, please pin, share or leave a comment below! Thank you! ❤️ 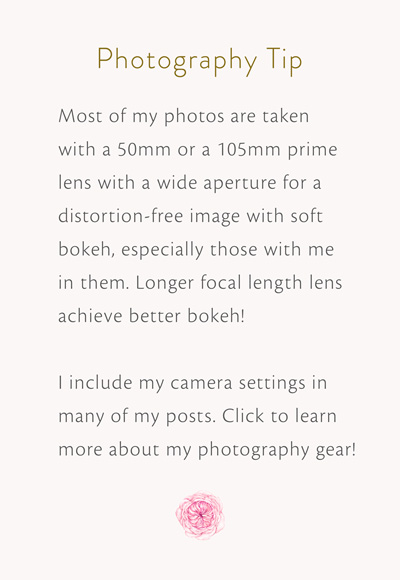 If you truly love nature, you will find beauty everywhere.