Step inside a storybook setting,
An impressionist garden in the French countryside…
Monet’s real life garden and inspiration for 40 years,
A visit you’ll never forget!

Claude Monet is one of my favorite artists of all time. His paintings mesmerize me and inspire a sense of serenity and wonder that is still unrivaled. He’s famous for his Impressionist paintings of water lily ponds, serene and colorful gardens, and Japanese footbridges, all of which I love.

But I never knew that these paintings were all based on his own garden, AND that I can actually visit this garden in person! So when Ken and I decided to visit Mont Saint-Michel (read about my trip here!), we knew that we also had to visit Monet’s Garden, both of which are located in the Normandy region of France west of Paris.

note: opening days, hours and admissions have been updated below for 2021, but please check their website if you’re planning a trip!

Come with me as I explore this enchanting garden full of impressionist flower beds (yes I just made that term up!), flower arches, a lush water garden, and yes, the famous water lilies and Japanese bridge! It really is just like stepping into a Monet painting!

My garden is my most beautiful masterpiece.

Some of the links in this post are affiliate links. Learn more in my disclosure page. Thank you, I hope you have a wonderful day! 😊

A little bit about Claude Monet, in case you’re not familiar with one of the most famous painters in history. 😉 He’s one of the founders of the French Impressionist style of painting, which aims to reflect landscape rather than historical or mythological scenes while painting in sunlight directly from nature (plein air painting).

Monet, the son of a grocery store owner who defied his father to become an artist, most enjoyed painting the French countryside. So much that he and his family settled in Giverny, a small idyllic village located approximately 50 miles west of Paris, in 1883. During the last 40 years of his life, he primarily painted scenes from his garden that he painstakingly created.

He became famous for painting the same scenes in different seasons, showcasing the changing effects of light. His famed “Water Lilies” series of 250 oil paintings depict scenes from his garden in Giverny and were the main focus of his artistic creations during the last thirty years of his life (many painted while he suffered from cataracts!). Eight of the water lily murals were offered by Monet to France the day after the armistice of November 11, 1918 as a symbol of peace and have a permanent home in the Musée de l’Orangerie in Paris.

I want to paint the air in which the bridge, the house, the boat is. The beauty of the air where they are, and this is nothing but the impossible.

He was passionate about gardening as well as color and designed his garden of flowers as if they were works of art. In turn, his garden became the inspiration for many of his greatest works of art, such as those with the Japanese bridge and the water lily pond.

Our Visit to Monet’s Garden

As with many other places we visit, Ken and I tried to be among the first ones there when the garden opened, determined to get some pictures before the crowds arrive. However, since we enjoyed a leisurely breakfast at our charming B&B that morning (read about our wonderful stay in Giverny here!), there was already a short line ahead of us when we arrived just before the opening time of 9:30 am. That’s OK, I can deal with a few people! (or so I thought…)

The first thing I noticed about the garden is that it’s huge! The house and gardens are spread over one hectare (about 2.47 acres) and are separated into two distinct parts: the Clos-Normand with the pink plaster house, flower arches, and multiple garden paths; and the Water Garden across the street. The Water Garden is where you’ll find the famous Japanese Bridge and the water lilies that he painted so often!

MAD DASH TO THE JAPANESE BRIDGE

Following advice that we read online, we headed straight for the Water Garden and Japanese bridge since that is a popular area for photos and can get crowded. To get there, we had to cross the entire Clos-Normand area and go through an underpass to get to the Water Garden. (On the map, #2 is the entrance and #7 is the underpass.)

As we approached the underpass, I was surprised to see a large tour group and wondered how they got there ahead of us. I thought there were only a few people ahead of us in line?! It turns out there’s a second entrance for larger groups near the underpass! Slightly alarmed and sensing the urgency, I started walking faster, through the underpass and along a meandering path leading to the Japanese bridge.

When we got there, slightly out of breath, there were 2 or 3 people already on the bridge (they must have run all the way there?!). I quickly positioned myself and my cute straw bag at the bridge overlooking the pond and asked Ken to take some pics from behind me with our beloved Nikon D750 (newer model D780 here) (using a wide angle with a 24-70 mm lens). Very soon afterwards though, the bridge became quite crowded with a line forming for pictures. When I went back later to take pictures from another perspective (with Ken further away), we had to wait at least 10 minutes for our turn, and we had to make it very quick since I was sure that the bridge had reached weight capacity by that time!

After that, we decided to do the polite thing and leave the bridge and not add to the madness. We strolled around the large pond and felt transported to one of Monet’s paintings of this exact garden because it really does look just like the paintings, with the water lilies, weeping willows, glittering light upon the pond, and even an old wood boat that we imagined he and his family rowed on!

We all went to the garden; I was digging, planting, hoeing myself; in the evening, the children were watering.

The water garden is also filled with plants such as bamboo, maple trees, Japanese peonies, and white lilies. Truly a wonderful garden!

As we strolled around the pond, we enjoyed the view from the different angles and appreciated the vine-filled metal arches that were also perfect photo opportunities. If only we could have the place to ourselves!

Reformation dress, sold out but they have lots of other cute dresses! || Straw bag from Amazon, similar here || Straw hat from Macy’s, similar at Amazon || Zara Sandals

A Storybook Setting at the Clos-Normand

Having fully enjoyed the Water Garden, we headed back to the Clos-Normand part of the garden, which was less crowded (except for inside and around the pink house). This whole area is so charming and looks just like a picture book. The garden is full of carefree wildflowers with areas of more organized plantings. Plants are allowed to overflow onto the paths for a less formal look, which I loved.

There’s a long metal archway in front of the house that’s covered with wispy and colorful flowers such as poppies and daisies that look slightly wild and untamed and utterly charming. I immediately started wondering how I can fit one into my own backyard as well!

Depending on the season, the Clos-Normand may be blooming with: peonies, roses, tulips, narcissi, daffodils, poppies, forget-me-nots, daisies, climbing wisteria, lilies, and a plethora of other flowers. For more information on the flowers of the garden, please see the Fondation Monet’s website section on flowers here.

By the way, if you love flowers as much as I do, you might be interested in my post on the most beautiful flower books (it’s one of my most popular posts!). I also love flowers so much that I designed a series of flower-themed journals/notebooks!

The Pink House Where Monet Lived

The second most popular spot in the garden is the pink house that Monet and his family lived in. By the time we made it there, the inside was very crowded and it was difficult to even move around, much less take any pictures! We did a quick tour and went back outside instead. We did spend some time appreciating the layout, the many paintings hanging on the walls, and the historical notes. I love visiting homes of historical figures!

Next to the house, there’s a gift shop in the greenhouse where he painted his large water lilies paintings and murals, including those exhibited at the Musée de l’Orangerie in Paris!

If you’d like to see more pictures of Monet’s Garden, including inside the pink house, make sure to check out my French Instagram friend Ophelie’s (@limitlesssecrets) post on her recent visit to Monet’s Garden! Not only does it have lots of beautiful pictures, it’s also full of great information on visiting the garden and the surrounding areas!

About Monet’s House and Garden Today

After years of neglect following his death in 1926, Monet’s house and gardens were restored according to his own specifications. It opened to the public in 1980 and is managed by the non-profit organization Fondation Claude Monet. Monet’s Garden is now the second most visited tourist site in Normandy after the Mont Saint-Michel!

How to Get to Monet’s Garden

There are several ways of getting to Monet’s Garden from Paris:

More information can be found on the Fondation Claude Monet website.

Since we visited Giverny as part of our Normandy road trip, we rented a car and drove there ourselves. Our drive from the CDG airport was approximately 1.5 hours long, passing by the beautiful French countryside.

Plan Your Next Trip to France!

Dine and Stay in Monet’s Hometown!

Monet’s Garden is located in the charming French countryside village of Giverny. If you have time, I highly recommend an overnight stay in the area or at least enjoy a meal there in order to immerse yourself in the countryside charm that Monet loved so much!

For lunch or dinner, I recommend the lovely terrace at Restaurant Baudy (TripAdvisor reviews here), located only 5 minutes from the garden. Make sure to visit the beautiful garden in the back with a preserved artist’s studio full of period details! The restaurant has been frequented by many artists such as Cézanne, Renoir, Sisley, Rodin, and Mary Cassatt from Monet’s time. I’ve included pictures and more information in my post on Giverny.

To appreciate and explore the charming village and area more, we stayed overnight in Giverny, and were so glad we did! We stayed at La Dîme, a beautifully renovated historical farmhouse turned B&B and wedding venue. Read more about my stay in Giverny here.

All photos on this page were captured with the fantastic Nikon D750 (new model D780 here), using a Nikon 24-70 mm lens and a Nikon 50 mm f/1.4G Lens, and edited with Adobe Lightroom. Read more about my photography equipment here!

Must Have Flower Books!

Hello, thanks for stopping by! I’m Pansy, California-based travel + lifestyle blogger, photographer, and lover of ALL the pretty flowers! If you browse through my blog, you may notice that most of my travels, DIY & photography are related to flowers and nature! 🌸🌼🌿 More about me here.

In addition to this blog, I also recently started designing and creating journals + notebooks, available on Amazon! Please check out my website www.fleurettepress.com. 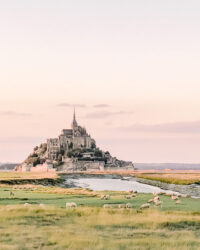 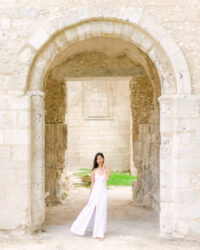 Jumièges Abbey – The Most Beautiful Ruins in France 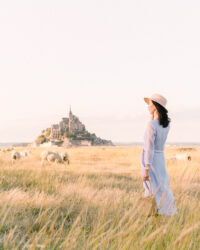